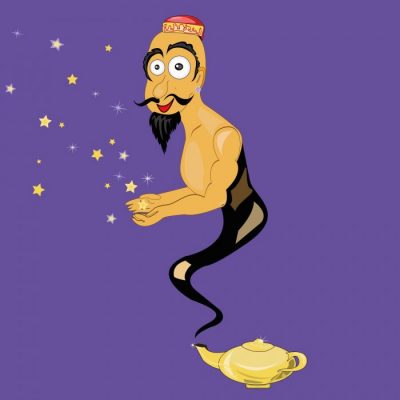 Do you really want to know the secret of your success? I will tell you a secret about yourself that you may not have known. If only I had known this secret when I first started out in life, I would have saved myself much suffering. And maybe because I was young and foolish, I would not have listened. So, YOU be the judge. Will you listen or will you brush it aside? Behold what you are about to hear! May these words benefit those of you who have ears to hear and eyes to see.

This secret is disguised in one of Sherazad’s stories from 1001 Arabian Nights. She tells of an old poor fisherman who goes out one day to cast his net upon the waters four times and only four times. The first time he cast his net he pulled up the remains of a donkey. The second time he netted a pitcher full of dirt. The third time he netted shards of pottery and glass. On the fourth time he called upon the name of God and cast his net.

e pulled up his net this time he found a brass jar with a cap that had the seal of Soloman on it. The Fisherman was overjoyed, since he could sell the jar for money. He was also curious and removed the cap with his knife.  A puff of smoke came out of the jar from which a genie appeared. The fisherman was frightened at first and then realized that the genie might grant him some wishes for releasing him from the bottle.

But to his surprise the Genie asked him to state the manner in which he wished to die. Nervously, and with great fear and anxiety, the fisherman quickly said, “I thought that an honorable Genie such as yourself would be grateful for this release.” The Genie said that for the first 500 years he would indeed have been grateful. And, even for the next 500 years he would have granted the person who freed him great wealth. And for the next 500 years he would have granted him 3 wishes, but still no one came. However, after 2000 years he became enraged that no one came so he swore that we would grant the person who freed him a choice of deaths.

Now the fisherman was really frightened and desperately began to call upon Higher Powers. Almost immediately, he was inspired by an idea. He decided to challenge the Genie by saying to him, “This is some kind of trick. You could not really have come from that bottle!” The Genie replied, “This is no trick, and I will prove it.” He got back into the bottle. The fisherman then quickly put the cap back on the bottle.

This time the fisherman had gotten the attention of the Genie. The Genie now addressed the fisherman much more respectfully. “I can see that I have underestimated you, and that you are a very capable and honorable man. If you free me, I will indeed agree to grant you the wishes you desire.”

The fisherman was not so sure and said, “Earlier, you were quite ready to take my life. What assurance would I have that you would keep your word?” The Genie replied, “Once I give my word then I am bound by my word. There are worse things that could happen to me than being trapped in a bottle if I do not keep my sacred word.” The fisherman decided to accept him at his word and released him. And this time the Genie kept his agreement and with great gratitude granted him many wishes.

Your Inner Critic is Trapped Like a Genie In The Bottle

And now you may be wondering what does this story have to do with the secret of your success? The answer is quite simple and profound.  The genie, the inner child and inner critic are very much alike, and are all aspects of the subconscious mind. They’ve been trapped by all the shoulds, have-tos, supposed-tos, and had-betters, believing that some sort of punishment will insue if he/she doesn’t “obey”  them.

The subconscious remembers these experiences and acts as if they are real, because the subconscious does not distinguish fact from fiction. The inner critic has been given the job of protecting you and will do so to a fault, not knowing how relevant these perceptions are to your present experience. So until you are able to release your inner critic from this prison, he/she will remain trapped and will not be very happy about it, just like the Genie in our story.

Your Inner Critic is Not to Blame

So what do you do about this now? The answer is that your personal Genie in the bottle is still open to suggestions and can be commanded by you to grant you wishes and give you the support you need and want. This happens as a result of the intimate conversations you have with yourself.

You CAN learn how to guide this Genie into being your very best friend and encourager.  Once you learn the language of your inner critic, you will have access to the power of your subconscious mind. This inner critic can and will be transformed, and it will seem quite miraculous when compared with everyday life experience.

Your Inner Critic CAN Be Guided To Help You

What would it be like to always be supported in a positive and constructive way?  How would it have been to grow up being encouraged with words like, “I am so glad you were born”, “I love you”, “I am so proud of you”, “Let’s help you to learn from your mistakes”, “I know you can do it”, “I will be with you all the way.” Your inner critic can be guided to help you with creative ideas, valuable support and overcoming fear and anxiety.

When you find that you are being criticized or internally admonished, just try saying to yourself, “Why are you criticizing me?” And wait for the answer. It will be something like this, “I am just trying to help you. You won’t listen to me any other way.” Or, “This is the only way I know how to help you.” There will be either justifications or even words like, “I know what is best for you.” Or, “You don’t know anything. I always have to tell you what to do, because you just don’t listen. What’s wrong with you?”

When you are used to these words, they can be rather intimidating. However, when you realize that you are talking to a child who is pretending to be an authority, you may realize that the child does not really know what he or she is really doing or where all of this came from. Therefore, you need to be kind and tell this grown-up child that he/she has copied those people from the past without knowing why. And he/she has been on automatic pilot ever since. This way you become the guide and educator, and eventually your inner genie will be ever so willing to help in a much more positive way than ever before.

And now you have the secret, so let the challenges begin!
Beyond all hopes and beyond all fears, I bid you Genie do now appear!

1 thought on “Inner Critic Holds the Secret to Your Success”