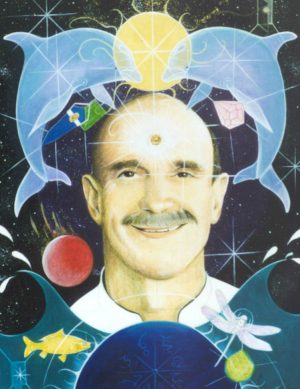 Little did I know what would happen when I took my first Group Dynamics psychology class in 1968. I couldn’t believe we were really being encouraged to delve into our deeper feelings. In my family we never did that! Thrilled by our interactive, insightful communication, I quickly became a group leader. Intrigued with discovering and resolving deeper issues, I eagerly attended a workshop lead by Gestalt Therapist, Fritz Perls in Esalen. He started working with a woman whose father had recently died. Fritz asked her to say good bye to her father. I wept! My mother had died in a car accident when I was 11 years old. Surprised and relieved that I had finally said goodbye to her, I was fascinated. Looking for confirmation, I received a channeled reading by a man who saw me as a natural born therapist.

I later learned to do psychometry, psychic readings, spiritual healings and channelings. Still, I felt incomplete. I asked the Universe for further support. This led me to rebirthing and training with Leonard Orr, where I released many feelings regarding my father’s recent passing. I was ready! At the Whole Life Expo in San Francisco, I started giving psychic prosperity readings. Now I wanted to work with larger numbers of people, so again I asked the Universe for help. Suddenly I thought of an acquaintance who had attended a seminar program where people were encouraged to express their feelings. I told him that I could hear inside his voice what was blocking his success, and that with his willingness I could help him turn that around. Excitedly, he booked a block of sessions. Not only had I become clairvoyant, I had had also become clairaudient and clairsentient!

After many dramatic breakthroughs, he spread the word about me. Then one afternoon I received a call from a successful workshop leader who wanted me to work with her and her husband. Not in over 30 years of seminar work had they ever experienced anything like what I do. We started a new personal growth company and traveled throughout the USA, Canada, Hawaii and the Caribbean.

Ecstatic over my success, I had dinner with a friend one night. She asked me, “Do you have everything you want?” I replied, “No.” Then she asked, “What else do you want?” I declared, “I want you!” Her jaw dropped, and her eyes glowed! At our marriage in Kauai my grandfather’s spirit murmured to me: “You will go far.”

Later, in Sedona, something unexpected occured. As a senior instructor, I was guiding some people up to a medicine wheel. Looking up at a high rock ledge, I clairvoyantly saw an Indian spirit guide. He seemed displeased at the intrusion. Telepathically I communicated: “We respectfully honor this sacred place.” He responded: “You will be known by many.” With loving tears of joy I realized that I am going far, and I am being known by many! I’m so grateful! Thank you! This is what I came here to do!